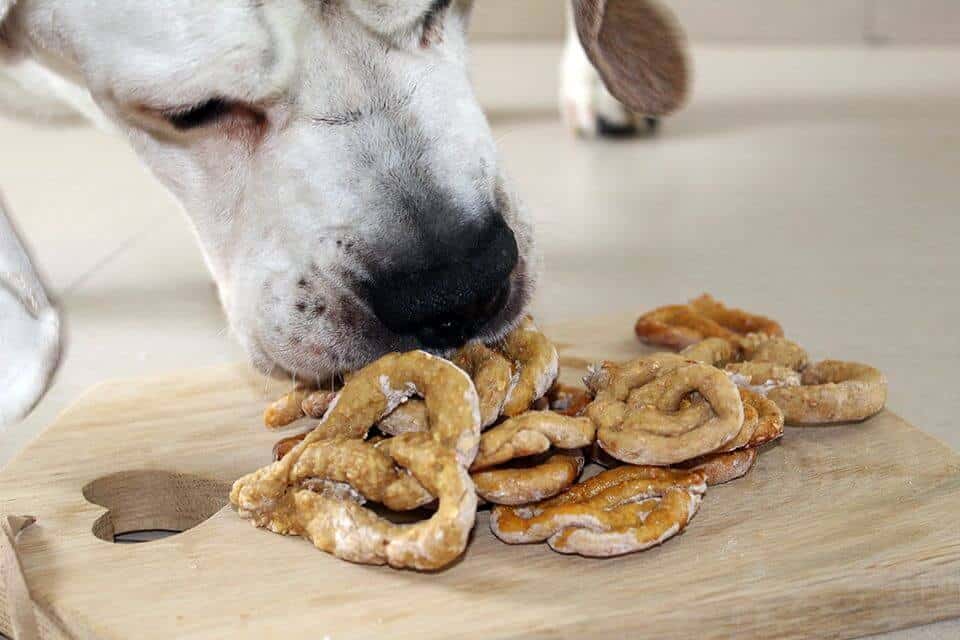 Pretzels, be they hard or soft, are one of the most delicious snacks that we love to nibble on, and any dog owner knows that our canine friends love to taste and share all our food. However, unfortunately, not all foods are safe for dogs. That’s why we’ll tell you in this article whether pretzels are bad for your canine companion and why you should or shouldn’t share your pretzels.

Yes, but it’s not recommended for them to do so. While regular salted pretzels don’t pose an immediate danger to your dog, they aren’t good in the short or the long run. Moreover, they don’t add any nutritional value to your dog’s diet. So, while giving them occasionally a couple of pretzels may be okay, they should never become a frequent treat.

How Safe Is It for Dogs to Eat Pretzels?

Pretzels are kind of safe, but just because they are a safe snack for humans, it doesn’t mean that they are safe for our canine friends. Humans and dogs have inherently different digestive systems, so what may seem like no big deal to you could cause your dog some severe discomfort, if not outright illness.

Now, while the baked part of a pretzel can be okay for a dog to eat, the pretzel’s coating/flavoring is a big no-no. These flavors can be very harmful to a dog’s health, some more than others. As such, something as innocent-looking as a pretzel can make your pup feel unwell and, at worst, lead to its death.

Why Are Pretzels Considered Dangerous for Dogs?

As previously mentioned, it’s mainly due to the pretzel’s coating. So, let’s take a look at how each of the following ingredients can affect your dog’s body, and then, you’ll know why your pup should stay away from pretzels.

Believe it or not, the main reason that pretzels are considered oh-so-dangerous for dogs is that they’re coated in salt.

While this may seem unalarming, the salt content in a few pretzels is more than the amount recommended for a dog’s daily intake. And while humans can get rid of excess salt pretty easily, the bodies of dogs aren’t equipped to do so.

As such, if your doggy eats one too many pretzels, it may become excessively thirsty and may need to go more frequently due to the increased water intake. In some instances, when a dog eats an excessive amount of pretzels, the high salt content may cause a condition called salt toxicity.

This condition happens when the dog’s body tries to get rid of the excess salt by losing water through vomiting and diarrhea. Consequently, the body goes into a state of dehydration that’s detrimental to all the organs, especially the brain.

When this happens, dogs begin demonstrating symptoms such as depleted energy, seizures, muscle spasms, convulsions, and increased heart rate. Sadly, if they aren’t immediately treated, they may go into a coma, develop respiratory problems, and then die, all because of a few pretzels.

As a general rule, the daily recommended amount of salt that a 33-pound dog should have is about 100 mg, and just one small hard pretzel has about 40 mg. So, you can exceed the safe amount of salt in a matter of seconds without noticing it. Therefore, it would be wise to avoid salted pretzels altogether, particularly if you’re raising a small-sized breed or a puppy.

Many dogs are, unfortunately, lactose intolerant in varying degrees. Accordingly, some may only have mild digestive distress, while others may develop hives, facial swelling, and difficulty breathing. Therefore, it’s generally best to stay clear of cheesy pretzels, both for the sake of your nose and your dog’s stomach.

Onions and garlic are considered some of the most dangerous things you can give a dog. These two plants from the Allium family can be toxic to your puppy in minimal doses and may lead to some life-threatening conditions.

Usually, after a dog eats anything containing those two plants, it can experience nausea, vomiting, diarrhea, and stomach pain due to gastrointestinal inflammation. However, the most dangerous side effect is that the red blood cells become damaged.

Once this happens, the number of functional red blood cells, which carry nutrients and oxygen to the tissues, falls, and your dog starts exhibiting signs of anemia like weakness, urine discoloration, kidney damage, and elevated heart and respiratory rates.

If this goes on without treatment, the dog will inevitably collapse and die. So, always remember to avoid onion/garlic flavored pretzels to protect your pup’s life.

If you’re more of a sweet pretzel person than a savory one, you may think that sugar-coated pretzels should be fine for canines. However, that’s far from the truth. Sugar in significant amounts can lead to various diseases in dogs, just as it would in humans.

If your dog consumes sugar regularly, it may develop dental caries, obesity, diabetes, and heart-related conditions. Consequently, pretzels flavored with yogurt, honey, cinnamon, white, fudge, and other sweet toppings should never be offered as a snack to our precious woofers.

Chocolate-covered pretzels are also out of the question as a dog treat. It’s not just the sugar in them that’s dangerous; the chocolate itself is toxic to dogs. The main reason for this is that chocolate contains something called theobromine.

This substance can affect a dog’s brain, heart, and respiration and cause symptoms like vomiting, increased heart rate, irritability, panting, muscle twitching, and loss of coordination. In severe cases, seizures, heart arrhythmia, and death can occur if a lethal dose is attained (100–500 mg/kg of body weight).

Additionally, chocolate also contains caffeine. Which is another substance that dogs don’t metabolize very well and can cause symptoms similar to those of theobromine toxicity. So, to keep a long story short. Dogs would do well to steer clear of anything that’s covered by chocolate, be it pretzels or otherwise.

If you’re a lover of soft, raisin-filled pretzels. You have been thinking of giving some to your dog, well, we’ve got some bad news for you. Grapes, and by default raisins, are toxic to dogs. So, while it’s still unknown what it is precisely about grapes that make them harmful. It’s been decided upon to keep grapes and dogs apart.

If a dog is unlucky and eats some grapes by mistake. It may initially vomit and then develop other symptoms like diarrhea, lethargy, and loss of appetite.

After 1 or 2 days, it may begin to experience acute kidney failure. It will show signs like excessive thirst and urination until the kidneys shut down. Unfortunately, once this occurs, the dog won’t be able to make it in most cases, even with adequate treatment.

Can a Dog Eat Unsalted/Unflavored Pretzels?

Okay, so you’ve seen what the flavored pretzels can do to your dog. You decided to go with an unflavoured variety to spare your dog. However, this still doesn’t put you in the clear.

The dough of the pretzel is still something that your dog shouldn’t overeat. Generally, food rich in carbohydrates shouldn’t make up a large part of a dog’s diet. This is because canines can’t process carbs very well and end up storing them as fat. Accordingly, your puppy may end up gaining weight, with the risk of developing diabetes and heart disease.

So, while it may be okay to give your pup a few plain pretzels occasionally, you should never forget to limit their intake so that they can have a long life, free of illness and disease.

What Should You Do If Your Dog Ate Pretzels?

This will depend on the amount and type of pretzels your dog has eaten. If it was just a few salted pretzels, offer your dog lots of water and be ready to go out for a few extra walks until the excess salt is eliminated from its system.

However, if your doggo ate more than a handful, then monitor them for any signs of salt toxicity. If you notice any signs of illness or weakness, you should make an appointment with the vet to begin treatment.

The two types of pretzels that necessitate a visit to the vet, no matter the quantity, are garlic/onion and raisin pretzels. Of course, chocolate pretzels are also considered dangerous, but the other two can be lethal. So, make sure to rush your pet to the animal clinic if you suspect they ate the previously mentioned varieties to prevent the worst.

To sum up, pretzels, no matter the kind, aren’t good for your dog. While most aren’t dangerous in small quantities, they still don’t offer anything of value, and some flavorings can be toxic. So, if you want to give your puppy a treat, it is best to look for something else. 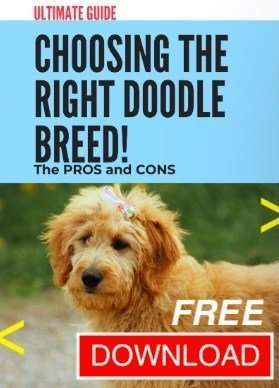 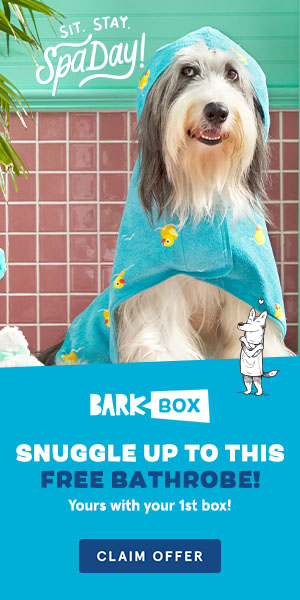