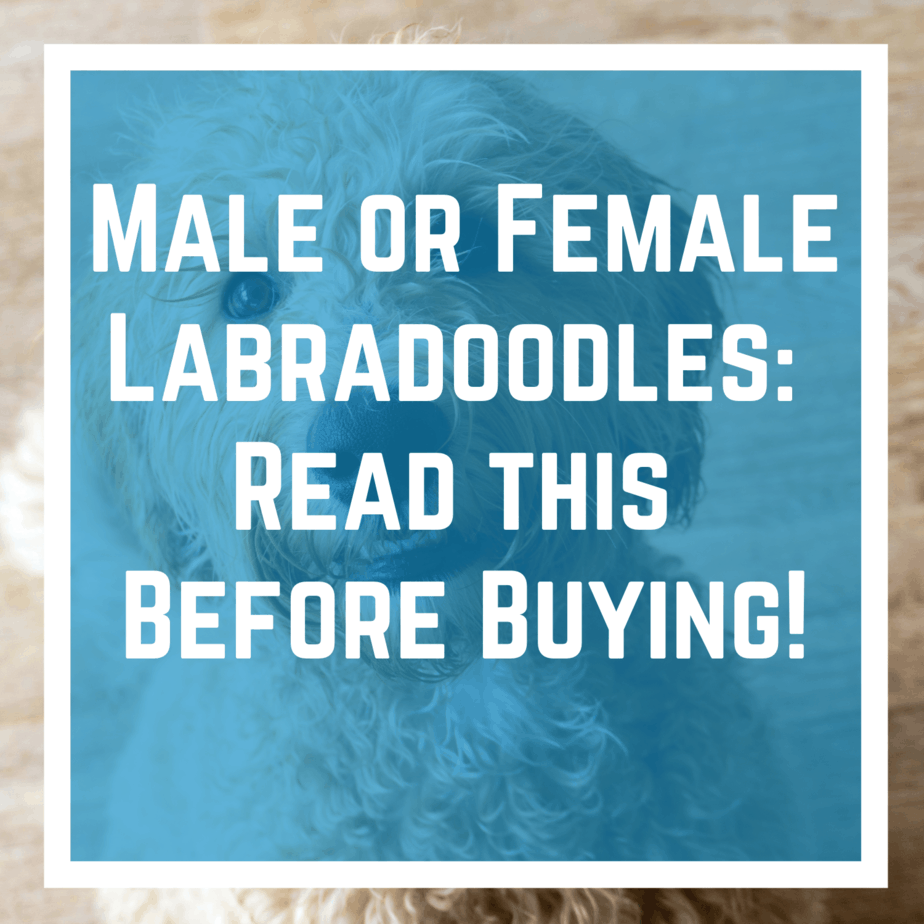 It’s a boy! Or is it? When buying a puppy, choosing between a boy or a girl can get confusing. Everywhere you turn, people will tell you that one is better than the other. Some claim that males are easier to train. Others claim girls are better with kids. But is there any truth to any of these? You’ll find out in Male Or Female Labradoodles: Read This Before Buying.

You might be wondering what the perks of getting a boy are. According to owners, boys are sweet, affectionate, and more loving than females. Your boy will also be more energetic and playful. But that’s just the positive side.

Some owners also say that while Labradoodles are intelligent, they are stubborn. They lack the discipline to listen and obey commands. But if you stay consistent, you will get through to them eventually.

People see female Labradoodles as more intelligent, resigned, and mature. People love that their females train quickly and seem more independent than males. And they won’t have to go through the intense teenage years of the male. But is any of this true?

Stop! Ignore Everything We Just Said!

That’s right. You need to forget everything we said. These are things that everyone says about girls vs. boys. No science shows males and females inherently act differently. They are all anecdotal and vary from person to person. But there has to be a reason that people see a difference in males and females.

You see, temperament is something a dog is born with. Personalities develop depending on how you raise them. If your household is more loving, your dogs might grow up to be the same way. And if you are active and take your dog along for the ride, your Labradoodles might be the same. So, where do these myths come from?

Most of the reasons for people to think about personality differences are due to hormones. Males and females have entirely different hormones that can make them act in various ways. For instance, males produce large amounts of testosterone that affects the way they behave daily. And females go through heat cycles that might change their behaviors a few times a year.

But what happens if you take away the hormones? You might find that without the hormones, you don’t see any difference between males and females. Your boys won’t have raging hormones that make them misbehave and act out. And your females won’t go through a few moody times a year. Your Labradoodle is just a Labradoodle.

What All Does Hormones Affect?

If you don’t get your Labradoodles fixed, you are bound to see a few differences in their behaviors. Let’s look at a few behavioral differences you might see.

One difference you might see in your Labradoodles are size. Females are slightly smaller than males. But just how big is a female Labradoodle? Females stand between 21-23 inches tall when measured to the shoulder. Males stand about 22-24 inches tall. But both genders weigh between 50-65 pounds. So the size difference is minuscule. You probably won’t even see the difference.

Are Male Or Female Labradoodles Easier To Train?

Some trainers notice that intact males have a hard time paying attention during training sessions compared to females. But we believe people misinterpret male attention spans to being less intelligent. Males and females have the same intelligence and capabilities. It’s just about training techniques.

Males in their teen months need a little different technique than females of the same age. To be successful with training your male Labradoodles, you need to adjust a few things. Taking your dog out for a walk will help them burn off steam before a training session. Most males of this age also become stubborn when training. To combat this, we recommend smaller sessions and changing up the routine often. And finally, train your Labradoodle in a distraction-free zone. If they can smell females, you can forget about training.

Once you get your techniques down, you will find that both males and females are equal in training abilities and speed.

Many people also consider behavioral differences in the males or females debate. Intact males have a lousy reputation for marking, mounting and humping, and running away searching for girls. But what many people don’t know is that intact females have these same issues.

A female going through her first heat cycle is just as likely to run away. Female Labradoodles can also go through territorial phases where they mark or mount. It’s not always as common, but it does happen more than you think. So these behaviors aren’t as gender-specific as people might think.

Most vets and trainers agree that females tend to reach mental maturity a little sooner than males. The reason females mature faster is because they go through hormones and sexual maturity earlier than males. Most female Labradoodles have their first heat by ten months old. That means that they have gone through all of the hormones that help level them out.

But this doesn’t mean that your female won’t act like a puppy still. She will always love to play and tag along on all of your adventures. But you will notice that shortly after the first heat, your Labradoodle will calm down slightly and express fewer puppy behaviors.

Males usually begin the teenage tendencies around ten months old. And you might find that they don’t level out until 18-24 months old. So it may seem like boy Labradoodles take forever to “grow up.”

Male Or Female Good With Children

You may be wondering if a male or female is better for households with kids. While it’s true, an intact female might be more doting over kids. It’s only natural for a female to be loving and care for young due to hormones. But that doesn’t mean that males can’t be just as affectionate.

There are plenty of intact males that love their human kids and stand protective over them. This situation is more about socialization and training than hormones.

And our last point to consider between males or females is their medical problems. The main concern with medical conditions are those related to hormones. Males that are left intact can develop prostate and testicular cancer. And females are prone to uterine and mammary cancers and urinary tract infections.

So Should I Get My Labradoodle Fixed?

The answer to this question isn’t always black and white. Not everyone wants to get their dogs fixed for various reasons. For instance, working dogs are usually left intact because the increased testosterone can give them more stamina. And almost all show dogs are not spayed or neutered.

But you should get your Labradoodle fixed if you don’t plan to breed them. Spaying and neutering your dog will prevent unwanted pregnancy and prevent reproductive disease. But not everyone agrees on when you should do this.

In the past, some people spayed and neutered their pets at early ages to prevent unwanted behaviors. FIxing your dog stops behaviors such as marking, mounting, and heat cycles. But new evidence has shown that fixing your pup too early could damage their growth.

Hormones that send your puppy into a raging teenager are also beneficial to their joint and mental health. In some research, studies have found that dogs fixed too early developed hip and joint problems, bone density loss, and memory loss in old age.

Most vets now recommend waiting until your dog is over a year old to prevent issues like this. The sweet spot seems to be anywhere between 12-18 months. And since Labradoodles have joint problems as they age, you should consider waiting as long as you can. But every situation is different. So we recommend always talking with your vet about your concerns before making a decision.

How We Treat Them

Male Or Female Labradoodles: Read This Before Buying isn’t finished yet, though! Another thing to consider in the male or female debate is how you raise them. We are talking about the nature vs. nurture debate here. Your Labradoodle will always have the same potential due to its breeding. But if you treat your boys differently than your girls, you might see a little bit of a personality difference.

If we raise boys to be rowdy and energetic, but girls as sweet mothers, we won’t see anything else. That’s why you see so many conflicting testimonials from people who have owned both boys and girls. As long as you raise your puppies the same, you won’t see much difference between males and females.

So Are Male Or Female Labradoodles Better?

The truth behind male or female Labradoodles: read this before buying is this. That’s up for you to decide. If you spay and neuter your Labradoodles, you won’t see much of a difference at all. Other than a slight size difference, all Labradoodles will have the same temperament. And they usually reflect how you raise them. So what it really boils down to is your preference. There is nothing wrong with preferring one gender over the other.

Below is a Pinterest friendly photo…. so you can pin it to your Doodle Board!